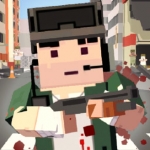 The Blocky City is under attack by the general and his mad soldiers! You're a hero and the last rampart against those fools! Show them how you use a gun and kill them all ! Last resistance - City under Siege is a terrific game which you can play for free in in friv2000.com. With Last resistance - City under Siege game, we supply many cool Friv 2000 games to play at no cost.