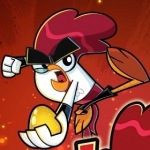 Chuck Chicken is on a mission. Defeat his nemesis Dee, Don, Dex, Dr Mingo and more in this exciting and fast-paced puzzle platformer game. Chuck Chicken is a worldwide kids and tweens animation brand with over 2 billion views. In this game, throw your egg, and watch as it bounces from wall to wall, defeating your opponents. Collect magic eggs to transform Chuck into his alter ego super hero. Chuck Chicken Magic Egg is a game which you will like playing at friv2000.com. Here you can find & enjoy Chuck Chicken Magic Egg game and several other Friv 2000 games online free of charges.

Use Left Mouse button to Play